The realm of retail perfume bottle design is both puzzling and paradoxical, despite the fact that their function is rather simple.

Their dazzling beauty set in glass separates them visually from conventional liquid dispensers, but in reality they serve the same purpose.

The narrative of perfume bottle creation is no less alluring and sophisticated as the fragrance it contains.

According to designer, photographer and filmmaker, Fabien Baron: “The designers are actually inspiring the perfumers and giving them ideas…Even if the fragrance is amazing, people won’t buy it if they don’t understand it. They need to feel a connection or it just won’t work.”

It is said that the devil is in the details, and this axiom couldn’t be truer than in the case of fragrance packaging and marketing.

When done correctly, the bottle’s mysterious allure, which is so much more than just serving as a dispenser of fragrance, is both boldly displayed, and simultaneously hidden in plain sight.

A bottle design must make both a fashion and a lifestyle statement in order to affect the ultimate perception of its contents. It should also appeal to consumers from diverse demographics.

While it might seem incongruous to imagine that the visual impact of a perfume can sometimes be more important than its olfactory powers, the idea of working from the outside in on a perfume has been standard operating procedure for many, many years.

It’s like that proverbial cart before the horse, but it does not mean (again the paradox) that designers are free to design whatever they wish. 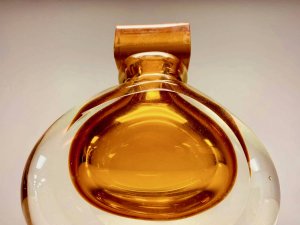 In fact, it often boxes them into a more deliberate approach. It is the bottle that will not only render the shape of the final formulation but will also, by its very presence, tell the story.

Once again in the words of Baron: “People love the story and what it stands for. Think of how we grow to appreciate the little quirks and imperfections in the people we fall in love with. The stronger our emotional connection, the more beauty we see.”

Not surprisingly, bottle design is even more important to contemporary perfume creators and purveyors than it ever was in the past because of online shopping and its lure of convenience to the modern consumer.

Due to the fact that there is no tactile or human exchange in cyber space, it is the visual impact of a fragrance that captivates and kindles consumer interest.

French designer, Thierry De Baschmakoff, states: “The bottle is the first form of communication and the first contact that people have with a scent. So, of course, it has to resonate.”

It is the masterful attention to every aspect of development and packaging that lures the consumer into the luxurious cosmos of the fragrance captured within the bottle. 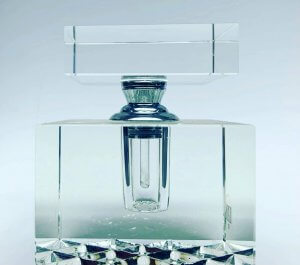 It is the door leading to the olfactory adventure that both attracts attention and helps to sell the fragrance.

An aesthetically designed perfume bottle boosts the value of an elegant scent, which in turn permits perfume houses to glean more profits and establish a stronger foothold in this highly competitive global market place.

A 2014 conference paper authored by Camila Assis Peres Silva from the University of Sao Paulo in Brazil and entitled: Packaging, Color and Scent Perception was presented at the 9th International Conference on Design and Emotion.

The focus was the importance of using colors in a packaging design for perfumes as a means to visually communicate with consumers and influence fragrance perception. Results indicated that this works because unspoken qualities are assigned to colors as they reflect every day experiences.

For example, the ﬁre, which exudes warmth, ranges from yellow to red and ice, which translates into coldness, is blue. In addition, shape, texture and color when combined must be consistent if they are to trigger a desired response. 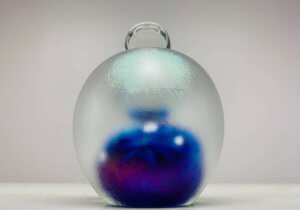 Scent was a prized commodity in the ancient world, and artifacts from early cultures reveal many different types of storage vessels.

The Egyptians created ornamental flasks made of clay and wood, and Palestinians constructed exquisitely colored glass bottles to house their fragrances. 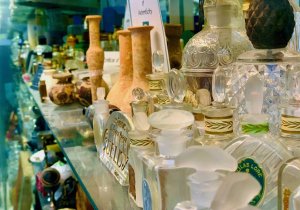 Hand-painted vases in animal shapes were favored by the early Greeks, and the Romans were known to scoop out the innards of precious stones to serve as containers for scents that were as treasured as their contents.

According to Mary Ellen Lapsansky, vice president of the Fragrance Foundation, a US-based organization that promotes and educates consumers about perfume use: “The bottle should be an ‘objet d’art;’ it’s really what makes the statement. It’s the selling point… Customers don’t just pay for the perfume inside but also for the attractive bottle, since the two go hand in hand. Major perfume houses pay special attention to how they design the perfume bottle, although very few dare to be too different in their presentation.” 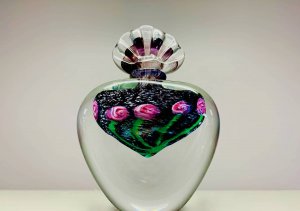 Contemporary perfume bottle designs have become bolder and even iconoclastic, using unexpected and odd shapes, such as the human form, which don’t usually inspire motifs for packaging.

Perfume bottles are luxury artifacts from eras long faded into the tunnel of time. They are integral to an historical narrative regarding the essence of beauty down through the centuries.

Popular throughout Europe during the Middle Ages, bottles were constructed from a wide range of ceramic, glass and metal materials.

Originally hand-crafted individually in small quantities, the myriad of advancements borne from the Industrial Revolution in the 19th century transformed the manufacturing of perfume bottles into a major industry for established glass makers and perfume houses. 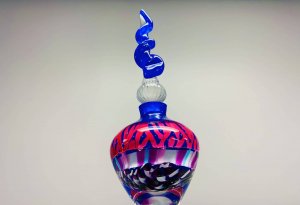 Antique and vintage perfume bottles can be small or large, and run the gamut in shape and design. At the dawn of the last century, perfume bottles were also designed as jewelry to be worn as necklaces.

There are, however, some qualities that are considered more collectable than others. Czechoslovakian perfume bottles, for example, are highly prized for their vivid coloration, finishes, and ornamentation.

Composed of crystal, these bottles often have intricate stoppers that can be as large as the bottle itself.

Jonathan Cohen, a marketing manager at DuPont, a world manufacturer of resins used for for a myriad of packaging applications states: “Today, almost all stoppers for even the most expensive fragrances are made out of plastic…a  lighter, unbreakable polymer that still offers a glass-like sparkle and transparency. The polymer is resistant to the ingredients of the fragrance and does not alter the nature of the scent.” 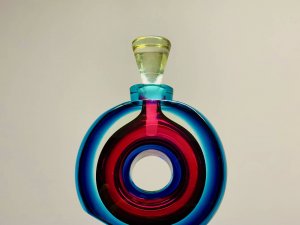 According to Helen Farnsworth, archivist at the International Perfume Bottle Association (IPBA), for most collectors, the value of perfume bottles has nothing at all to do with whether or not they still contain their original fragrance.

She states: “It’s not easy to point at what makes a bottle collectable – it can be the look of the bottle, the designer, the brand or the smell. There’s an endless variety of factors and it’s very subjective… However, these bottles are worth even more money if the fragrance is still inside and the box has not been opened.”

Today, expert perfume bottle designers are pushing that creative envelope even further, as materials like color-coated glass, lightweight plastics and even wood have become more readily and economically available.

These are adapted for use in dramatic and sophisticated designs for bottles in every shape and size.

Alpha Aromatics’ roots began after the trying aftermath of World War II, and ever since, we have been ‘building great scents that build great brands”, a mantra that has remained unchanged for the last seven decades.

Located in suburban Pittsburgh, Pennsylvania, we are known for our masterful ability to transform the vision of any enterprise into an unforgettable olfactory communion between products and consumers that is certain to attract and inspire traffic and induce brand loyalty.

While we are not in the perfume bottle design business, we recognize it to be a vital piece of the puzzle of perfume brand creation. We value its importance and see it similar to that geometric axiom about the whole being equal to the sum of all its parts.

In fact, our founder and CEO, Arnold Zlotnik, has amassed one of the most extensive collections of unforgettable, non-retail perfume bottles in North America — the most alluring of which are featured throughout this blog and throughout the halls of our manufacturing faculty.

Final thought on fragrance: There are no women who do not like perfume. There are only women who have not yet found their scent .~ Marilyn Monroe 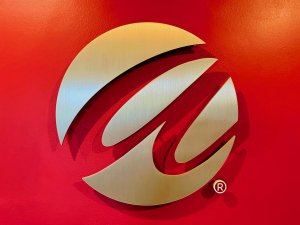