As an extension of our recent guide to scented candle manufacturing, we thought we’d dig a little deeper into the rich history of candle making and provide a comprehensive overview of candle use in the Victorian era. With candle manufacturing becoming an increasingly competitive and profitable industry, we feel studying the past is the best way to pave new and innovative paths forward.

Whether it’s candles or taking reed diffuser systems to their next level, there’s always something to learn when stepping forward by first looking back. In the words of Machiavelli, “Whoever wishes to foresee the future must consult the past”, and as one of the leading manufacturers of fragrances for scented candles and reed diffusers, we take every step to provide every competitive edge for our clients, suppliers and distributors.

The Use of Candles in the Victorian Age

Candles were a necessity of Victorian daily life as there was no electric lighting until a few decades later at the dawn of the 20th century. Candlelight was used for most ordinary activities throughout the era, from dining and playing cards to cooking. The popularity of all kinds of candles is evidenced by the wealth of antique votives; sconces; candleholders; snuffers and candle-a-bras that are still found today in finer antique shops and fairs. Some favorite scents were delicate, understated and totally feminine such as violet, lavender, jasmine roses and honeysuckle. Scented candles were often used in funeral ceremonies, as along with flowers, they masked any unpleasant odors that might have lingered in a room where a “wake’ was in progress.

Why fragrance is the key to starting a candle business. 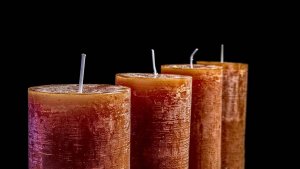 Steeped in a world of rigid etiquette and stringent propriety that today seems ludicrous even by the most conservative standards, Victorians lived in a colorful but tormented cosmos marked by strict decorum, smoky parlors, ornate flourishes, calling cards, whalebone corsets and repressed sexuality. Unmarried lovers were forced to love in secret shadows, communicating via furtive glances and messages hidden in gloves, stationery, fans, parasols and flowers.

Scents Relayed Those Feelings That Could Not Be Spoken Out Loud

Sexual affairs were shameful and clandestine, lustful thoughts forbidden (only for unmarried women) and the discussion of natural sexual desire considered impolite, unspeakable and repugnant. Scents of all kinds were used to allure the opposite sex, but they still kept things at a distance because they were never applied directly to the skin. These fragrances were often incorporated into the accessories of the day, such as: handkerchiefs, parasols, fans, gloves, clothing and cosmetic products like hair pomade or lip salve.

Messages of love were discrete and often secret

The manner in which women positioned their fans in public places indicated whether or not an admirer’s advances were welcome. Supposedly, they had a secret language all their own, as did handkerchiefs, gloves and parasols, which also communicated messages to any Victorian gentleman seeking to approach a lady. It is unclear how a young Victorian man could possibly learn how to decode all of these secret messages. Floriography, the language of flowers, denoted differing sentiments of interest, affection, passion and love when delivered to a lady’s parlor enclosed with a calling card.

Candles were costly and available only to Victorian upper classes

Every upper class Victorian household used candles and their accessories. Those with elegant homes with drawing and dining rooms used candelabra placed in front of long and tall glass mirrors. Sconces decorated walls, and oil lamps were usually on tables as were candlesticks. Gasolier chandeliers hung from ornately decorated ceilings. There were a variety of candles used during this period. Some had shades; others were frilled or tasseled and still others were either plain or made of paper.

Queen Victoria reigned for 63 years from 1837 to 1901. During that time span many technological advancements transformed the average English household. These included: flushing toilets, plumbed-in baths and showers, regular postal deliveries and towards the end, light fittings capable of illuminating entire rooms at the same time.

At the onset of the Victorian period, however, candles and oil lamps provided the lighting in most homes. Interiors were often fitted with chandeliers suspended from the ceiling and sconces fixed to the wall, but these were mostly used on special occasions. After dark, typical light sources were the light of a fire and portable sources such as candles, candelabras and oil lamps. By the end of the era, gas lighting illuminated many urban homes and electricity was slowly being introduced into many.

Candle-making in the 19th century

With the advent of the Industrial Revolution and breakthroughs in science and technology, many 19th century developments impacted the candle making industry, making them affordable to the lower echelons of English society. In the 1820s, Michel Eugene Chevreux discovered a method to extract stearic acid from animal fatty acids. This led to the creation of a new stearin wax, which was very durable and burned cleaner than any ever used before. To this day, stearin candles are made and sold throughout Europe.

In 1834, a new machine was invented that transformed candles from costly commodities to products now available to everyone. Joseph Morgan of Manchester, England, mechanized the production of candles with his Candle Mould Maker, which was a machine cylinder with movable piston machine that allowed for the continuous production of molded candles.

Paraffin wax was an added boon to candle production

Patented in 1850, paraffin wax was created after chemists in Battersea, UK, discovered how to efficiently separate this natural byproduct of petroleum and refine it. Odorless and bluish-white in color, it is created when crude oil is refined into gasoline. Paraffin greatly improved the candle-making process for a number of reasons. It burned cleanly and was the most economical of all the other candle fuels of the day.

The one disadvantage associated with the use of paraffin was that it had a low melting point. This was easily overcome with the addition of the more durable stearic acid, which was widely available. Paraffin wax enjoyed a heyday but began to decline after 1879 with Thomas Edison’s invention of the ubiquitous light bulb.

The custom of using candles for Christmas was first noted in 1848 when the Illustrated London News published a drawing of the royal family celebrating the holidays surrounded by a Christmas tree adorned with candles, sweets, fruit, homemade decorations and small gifts. It was also customary to place lighted candles in windows as a sign that anyone passing by was welcome to enter for food and shelter. Also, tradesmen often gave their loyal customers candles as holiday gifts.

What kind of candles did the Victorians use?

In the earlier years of the Victorian era, three types of candles were popular: tallow, spermaceti and beeswax. The cheapest of the three were the tallow, which were made from animal fat. They smelled badly and burned with a smoky flame, which little by little, produced less and less light. Spermaceti wax was the most durable of the three varieties and was the least likely to soften during the warmer months of the year. Beeswax candles were used in everyday Victorian life, but making them was extremely tedious and time-consuming.

Improvements in wicks, particularly plaited wicks, curled out the flame as it burnt, eliminating the need for constant trimming, which earlier candles demanded. By the end of the 19th century paraffin wax supplanted in popularity the other three candle varieties.

The exposed flame of any candle can be dangerous, and Victorians were fearful of fire. They were well aware of the precautions they needed to take, such as keeping candles always far away from the reach of children, preferably on a high mantle-piece. Candle guards or shields helped to reduce accidents, as the candle sat in the guard, which was filled with water. If the candle burned down, it would be quickly extinguished even if no one noticed it.

Today’s dependency on artificial light could never have been envisioned in the minds of the average Victorian. In this era before electricity, people were accustomed to moving around their homes after darkness fell, relying on the light from the fire, candles and their sense of touch. By 1901 when Queen Victoria died, electric lighting was still in its infancy. In cities and larger towns and villages, gas lighting supplemented by candles and oil lamps was commonplace. In rural areas, however, candles and oil lamps were the exclusive sources of light.

Candles have come a long way and their rich and colorful history down through the centuries shines a light all its own, both on past trends in scented candle manufacturing and future — in fact, if you look closely you can see whiffs of inspiration in our vast repertoire of fragrances. And if you’re a distributor, supplier or an entrepreneur looking to enter the candle manufacturing industry, speak with our team today.

Final thoughts about the Victorian Age: There are two ways of spreading light: To be the candle or the mirror that reflects it. ~ Edith Wharton