Roger Howell is one of the most recognized perfumer authorities in the world, using both his creative and scientific expertise to compose fragrances for thousands of grateful clients. For nearly 10 years, he has held the position as the Vice President and Chief Perfumer of Alpha Aromatics, a U.S. fragrance manufacturer based in Pittsburgh, PA.

A Serendipitous Twist Of Fate

Howell’s 40-plus-year perfumery and fragrance career began through a twist of fate.

After earning a Bachelor degree from New York University, he was looking for a job that was close to his Brooklyn, NY, home. When responding to a lab tech position, he walked into the company’s building, filled out the application, and then realized that he was at the wr 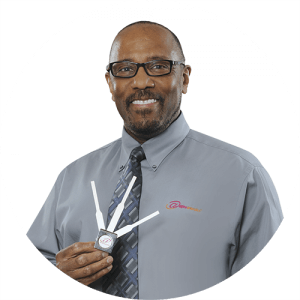 ong place. “I went to the wrong address, and it turned out that they were also hiring for a lab tech position,” he says, shaking his head in amusement.

That iconic company, Elias Fragrances, creators of Jovan Musk, hired him, and Howell’s new career bloomed. He found the world of perfumery fascinating, but was laid off a year later. He played percussion in jazz bands here and there, and one day he discovered that a fellow musician worked for J. Manheimer Fragrances.

He toured the company with the owner, who told Howell that he would give him a small test to see how well he could recognize scents. The test had 21 items—and Howell knew them all. The owner, impressed, created a position for him, and he spent five years at Manheimer, training with the perfumery staff.

A Career Path that Led to Excellence in the Perfume Industry

While on vacation in California, he decided that he wanted to stay there, and found a job as a perfumer in Los Angeles with Belmay West. Years later, a company in Houston, Intercontinental Fragrances, hired Howell to get their perfumery off the ground. Howell helped them build their department, traveling back and forth to France, and he met the owners of The Lebermuth Company, who eventually hired him as a Senior Perfumer.

Since this new company didn’t have a perfumer, he took up the challenge to create the department. During this time, his job role changed due to changing regulatory issues, and he decided to seek a new job where he could devote time to his passion – creating scents. Someone from Alpha Aromatics contacted him, and he and his wife visited the company at their Pittsburgh headquarters. They loved the city, and Howell has worked at the Pittsburgh-based business ever since.

A VP Who Wears Many Hats & Many Scents

As he comes up on a decade of service with Alpha Aromatics, Howell enjoys working in interrelated roles. He trains more than 120 employees—including lab technicians, sales staff, and customer service—in perfumery.

“I’ve trained colleagues and staff in basic and advanced perfumery at many of the companies I’ve worked at. At Alpha Aromatics, I’ve developed a course that requires everyone to study and identify more than 20 raw materials that are often used in creating scents and perfumes. Everyone at this company has the knowledge to provide our customers with the best scented products available on the market, including those used in fine fragrances, personal care products, home care, candles, and natural and organic products,” he explained.

He also spends a lot time on the road visiting clients and attending professional conferences.  He serves on the board of directors for the American Society of Perfumers, and attends the global World Perfumery Congress every two years to stay updated on the latest insights for suppliers, marketers, and manufacturers.

Right now, Howell says that Alpha’s business, as well as the business from several of the other companies under the Alpha Aromatics umbrella, has a solid base in industrial products, including odor neutralizers. Cosmetic and household product revenue has grown under his leadership, and Alpha Aromatics is uniquely positioned as both a scent developer and manufacturer to expand personal care products and applications, which are growing worldwide.

Howell also spends a lot of time creating scents in the Alpha Aromatics laboratory. Every day, before his administrative duties start, he is in the lab early to work on formulas and testing.

“I like the challenge of creating new fragrances. It takes time to design a fragrance that hasn’t been crafted before, and I love seeing it being sold in stores or to clients, and knowing how I had a part in it,” Howell says.

When he is not working, he enjoys working out (he’s been a Tae Kwondo instructor) and trying out area restaurants, as well as visiting Pittsburgh attractions with his wife.

As one of the industry’s preeminent perfumers, Howell has used his outstanding sense of smell and his fascination with formulating new scents to lead him down a path that’s been filled with opportunities and the sweet smell of success.

For more information on Alpha Aromatics, including products and a fragrance list, contact them today at 800-295-5261 or submit an inquiry.

Why Fragrance Is The Key To Starting A Candle Business
by: Alpha Aromatics on April 12, 2021

Candles come in all shapes, sizes, colors and scents and their manufacture is a multi billion dollar industry. In fact, according to the National Candle Association, an estimated 75 to 80 percent of all candles sold in the United States are scented. Annual retail sales are estimated at approximately …

What do women really want in their personal care products? The answer seems to continually haunt cosmetic, personal care I&I (Industrial and Institutional) packagers with turnkey opportunities as well as product manufacturers, mainly because the modern woman has a dynamic …